Jinghong is the capital and county level city of Xishuangbanna Dai Nationality Autonomous Prefecture, in the far south of Yunnan province, P. R. China, and the historic capital of the former Tai kingdom of Sipsongpanna.

Jinghong borders Pu'er City to the north, Mengla County to the east and Menghai County to the west, as well as Myanmar's Shan State to the south with a border line of 112.39 kilometers. The city is limited to the south by Hengduan Mountains, and the Lancang River (Mekong) passes through Jinghong. Two bridges near the city span this river, which flows south-east towards Laos.

Climatically, Jinghong contains elements of both a tropical wet and dry climate and a humid subtropical climate. The city has a generally humid climate with strong monsoonal influences. Summer is long and there is virtually no "winter" as such; instead, there is a dry season (December thru April) and wet season (May thru October). Annual sunshine hours amount to between 1800 and 2300 and annual rainfall ranging from 1,100 to 1,700 millimetres (43 to 67 in). The coolest month is December and January, averaging 16.5 °C (61.7 °F), while the warmest is June, at 26.1 °C (79.0 °F); the annual mean is 22.34 °C (72.2 °F). However, high temperatures reach their peak in April before the onset of the monsoon from the Indian Ocean.

3. Languages With 13 ethnic groups in Jinghong, dozens of languages can be heard throughout the province. Some ethnic languages belong to the language system with the other GMS countries, especially Laos and Thai, which helps a lot for Laos and Thais travelers and business man.  However, mandarin Chinese is used for official purposes and in business. English is not widely spoken in Jinghong, and foreigners will usually require an interpreter. 4. Administrative structure Jinghong administrate 1 downtown Yun Jinghong, 10 townships (2 ethnic minority autonomous townships) and 51 administrative villages.

Why invest in Jinghong 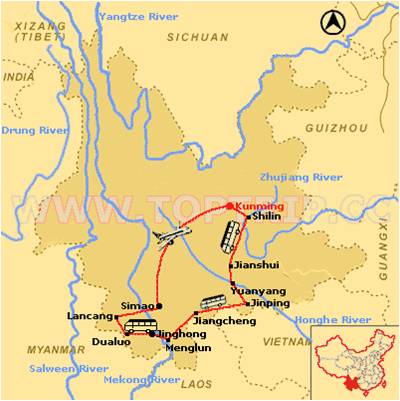 Jinghong is the important river port city linking China with Southeast Asian and South Asian countries and regions by land, water and airways. It is the distributing centre for freight and tourism to Southeast and South Asia. It has a bright prospect to be developed as the center of information and logistics. Two national level ports (Jinghong River Port and Xishuangbanna Gasa Airport) and 6 cross border passageways by land, river and air.

There are 71 river channels of Langcang (Mekong) basin flowing through Jinghong with a length of 150 kilometers. The main rivers of Jinghong can potentially produce 777,650 kw electric power. Jinghong hold a total amount of 3.097billion cubic meters water resources.

Jinghong is the second biggest black soil area in China. The total available land is 686,746.66 hectare, (10.30 million mu), of which the utilized land is 629,840 hectare (9.45 million mu), 91.7% of total land area, 56,906.66 hectare (0.85 million mu). Jinghong produces the top amounts of rubber, fructus amomi and cananga odorata in China and well known as the production base for commodity grain, live pig and soft-shelled turtle.

With the rich dark soil and tropical weather, Jinghong is called as “Green Treasure House” and “Species Gene Bank”. Jinghong has rich biodiversity  with 1861 species of animals, of which 11 species are in the list of national first class protected animals, over 600 vertebrate animals, 400 species of birds, 60 species of beasts. The biggest Primate Research Center in Asian and butterfly breeding farm in China are located in Jinghong. Besides animals, Jinghong area has 3890 species of higher-class plants and 340 precious varieties of trees. There are 44,100 hectares land was set up as the natural reserve area, with 84.46% forest coverage rate. Jinghong was awarded as one of national garden cities in China.

20 kinds of minerals had been explored , such as iron, manganese and tin etc. Meanwhile, a total of 15 hot spring and mineral spring spots have been founded.

With 13 ethnic groups in Jinghong, various cultures, from dressing, daring, traditional medicine and medical treatment methods, religious, music and arts, customs and festivals, provided a huge business opportunities on tourism and culture industries. With a average amount of 2 million tourists per year and higher level tourism services, Jinghong was awarded as one of excellent tourism cities in China.

According to the 11th Five-Year Plan, Jinghong government is planning to make great efforts on developing three economic belts, which are located on riverside, north and south of river.

Catalogue of Priority Industries for Foreign Investment in Xishuangbanna (2010-2015)

1)     Characteristic Biological Industries, highlight the construction of the production and planting base for tea, fruits and medicinal materials and tropical and subtropical crops.

8)     Science and Technological enterprises or research and development institutions, funded by foreign investors in collaboration with Chinese universities , research institutes and enterprises.

Jinghong has been a popular destination for tourists since the mid-1980s. At the end of 2012, there are 8.832 million tourists in total visited Jinghong. The total tourist income of Jinghong city has reached to RBM 10.188 billion, which increased 352.89% compare to the value of 2005. During the past 5 years from 2006 -2010, domestic tourists of Xishuangbanna are mostly from Yunnan followed by Anhui province; meanwhile, 47.06% of foreign tourists are Thai.

In 2012, Jinghong government has set up 21 projects as the significant tourist investment projects with actual investment of RMB 3.383 billion (Jinghong official information in 2012).

In the 12th five-Year Tourism Development Plan (2011-2015) of Xishuangbanna, Jinghong was featured as a comprehensive tourist leisure area for main types of tourism development products and activities, including leisure resorts, high-end conferences, business convention and exhibition, sports and fitness, shopping and entertainment. The plan target Jinhong as the important regional tourism hub and tourist destination by showing ethnic culture, and the tropical tourist cityscape. Jinghong also plan to develop some special tourist townships and villages as main way to reduce poverty and increase local people’s incomes. As the news reported in July 2013, the total value of foreign trade (January -June 2013) of Jinghong harbor has reached to USD 38.383 million, increased 37.3% compared to the same period of last year.

– Road in the park

The total value of agricultural outputs reach to RMB 11.519 billion in 2012 with 7.3% increased than last year.

Volume and increase rate of the main agricultural products, Xishuangbanna, 2012 The total value of industrial output of Xishuangbanna in 2012 is RMB 8.507 billion with the 14.5% increased. Output and Increase Rate of Major Industrial Products of Xishuangbanna, 2012

There are 9 main industrial industries in Xishuangbanna, including industries of rubber, sugar, tea, construction materials, hydropower, mining, biopharmaceuticals, agricultural special products processing industry, and exported and imported product processing. The total output of main industries is RMB 6.896 billion, of which added value account for 55 % as of RMB 3.778 billion. The city has the largest public transportation center in Xishuangbanna and connects travelers to nearby cities, towns and villages.

Made up of Jinghong, Ganlanba and Guanlei wharfs, Jinghong harbor is the first grade-national port in China. The Lancang-Mekong River international waterway has become a main artery to link China with Southeast Asia and even South Asia. Currently, Jinghong-Chiang Saen, Thailand, and Jinghong-Vientiane, Laos, international waterways has been opened. Visitor can take Bus No.2 to the port directly for CNY2 per person.

(3)   Airport: Xishuangbanna Gasa Airport is the second largest airport in Yunnan, located just five kilometers from the downtown of Jinghong. Flights to Kunming, Shanghai, Chengdu and other major cities in China run regularly. There is one weekly international flight to Luang Prabang (resumes 1 November).

Research and Development in Jinghong Jinghong Industrial Park is an on-going 15 years project (2006-2020. It is one of three industry parks in Xishuangbanna, and one of 30 key industry parks in Yunnan province. With a planned area of 31.7 square kilometers, the park comprise of Gadong and Jingha two areas. The total construction investment was estimated as RMB 5.3 billion, RMB 0.176 billion per square kilometers.

As of December of 2011, there are 26 enterprises and 29 projects, of which 21 industries projects, 6 logistics and real estate projects, 1tourism and 1 moving resettlement projects in Jinghong Industrial Park.  The projects are related to tourism integrated development, Furniture manufacturing, food production, automobile assembling, rubber processing, machine manufacturing and jade processing.

In order to enhance the economic cooperation with foreign countries, Jinghong has been constructing Modern Logistics Center Park since 2009 and will complete the construction in 2015 within planned 57 hectare area, which includes the basic facilities for logistic storage and related supporting facilities with a total investment of RMB 700 million.

Another Jinghong Water Border Port Logistic Park project is listed in the 12th Five-year plan too. This park has been started 2012 and will end in 2015 with 16000 square meters area and total 20 million investment. (Source: Xishuangbanna 12th Five-Year Plan for Foreign Economic Development of Xishaungbanna)  .

The credit policy of Xihuangbanna gave more support on some key areas, including key construction projects, featured enterprises, industrial enterprises, livelihood projects and “issues of agriculture, farmer and rural area”.   There are over 20 types of credit products supporting those projects. Recent years, some small scale financing institutions have been fast developed in Xishaungbanna. There are 17 small loan companies and 8 bonding companies in 2012, which  facilitates SME’s development in Xishuangbanna.  (Source: Financial support to local business development of Xishuangbanna, Bureau of Statistics,