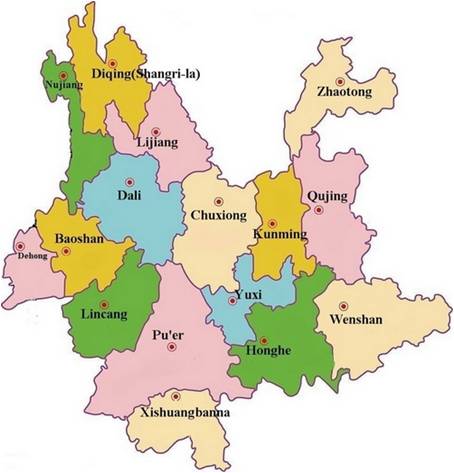 Yunnan Province is located in southwestern China and is its eighth largest province with a total area of 394,000 square kilometres or 4.1 per cent of the country’s landmass. Yunnan shares 4,060 kilometres of border with Myanmar, the Lao People’s Democratic Republic, and Viet Nam. The border with Myanmar spans nearly 2,000 kilometres, while the Yunnan-Lao border covers 710 kilometres and the portion with Viet Nam extends1,350 kilometres. Overland connections with these countries are well developed with 20 roads connecting Yunnan with its three neighbors. Yunnan’s terrain is basically mountainous, with 84 per cent of the country covered by mountains and 10 per cent consisting of highlands. River valleys comprise only 6 per cent of the total land area. The subregion’s major river, the Mekong, is called the Lancang River in China. The climate in Yunnan is characterized by two main seasons: the dry monsoon in winter and a hot, humid monsoon during the summer months. However, climatic variations are found throughout the province because of the differences in elevation and latitude. Tropical, sub-tropical, and temperate conditions are found in various parts of Yunnan.

(Source: The national economic and social development statistical bulletin of Yunnan province in 2012)

With numerous ethnic groups in Yunnan, dozens of languages can be heard throughout the province. However, Mandarin Chinese is used for official purposes and in business. English is not widely spoken in Yunnan, and foreigners will usually require an interpreter.

Yunnan has 16 prefectures and 126 countries. Eight of the prefectures have the status of ethnic minority autonomous prefectures. The three main cities, Kunming, Qujing, and Yuxi, are also classified as prefectures and fall under the jurisdiction of the provincial government. Yunnan contains three national development zones: Kunming Dianchi National Tourism and Vacation Zone, Kunming Economic and Technological Development Zone, and Kunming Hi-tech Zone. Additionally, there are 22 development and holiday zones at the provincial level.

Why invest in Yunnan Province

With publishing the 10-years overall development plan – Bridgehead Strategy – in January 2013, Yunnan has targeted itself as the important opening economic portal to link China towards Southeast and South Asia, even expand to the Middle East.

Based on the construction of current 5 pillar industries, such as the development of the tourism, tobacco, minerals, agriculture/biological resources, and (hydro) power industries, Yunnan will make increased efforts to step up their development to be more characterized.

Yunnan often proudly presents itself as a ‘green’ province with an equally ‘green’ economy. This means importance is attached to the sustainable development of the region’s bio-resources as well as the protection of its natural environment. The agricultural sector therefore gets a lot of support in the development of e.g. ‘green’ or organic food, but also the production of traditional Chinese medicine, cut flowers and bio-chemicals is being encouraged.

Yunnan’s strategic geographical location towards China’s ASEAN neighbors makes that the province is determined to become a major regional hub, especially with regards to transport, (tele)communications and tourism.

Investment is welcome in most sectors of the economy and it is open to all nationalities. Potential investors should consult the provincial “Regulations on the Guidance of Foreign Investment” and the “Catalogue of Priority Industries for Foreign Investment in Central and Western China (hereinafter referred to as the ‘Catalogue’), jointly released on May 14 by China’s National Development and Reform Commission (NDRC) and the Ministry of Commerce (MOC).

Selected priority industries for foreign investment in Yunnan province are given as below. 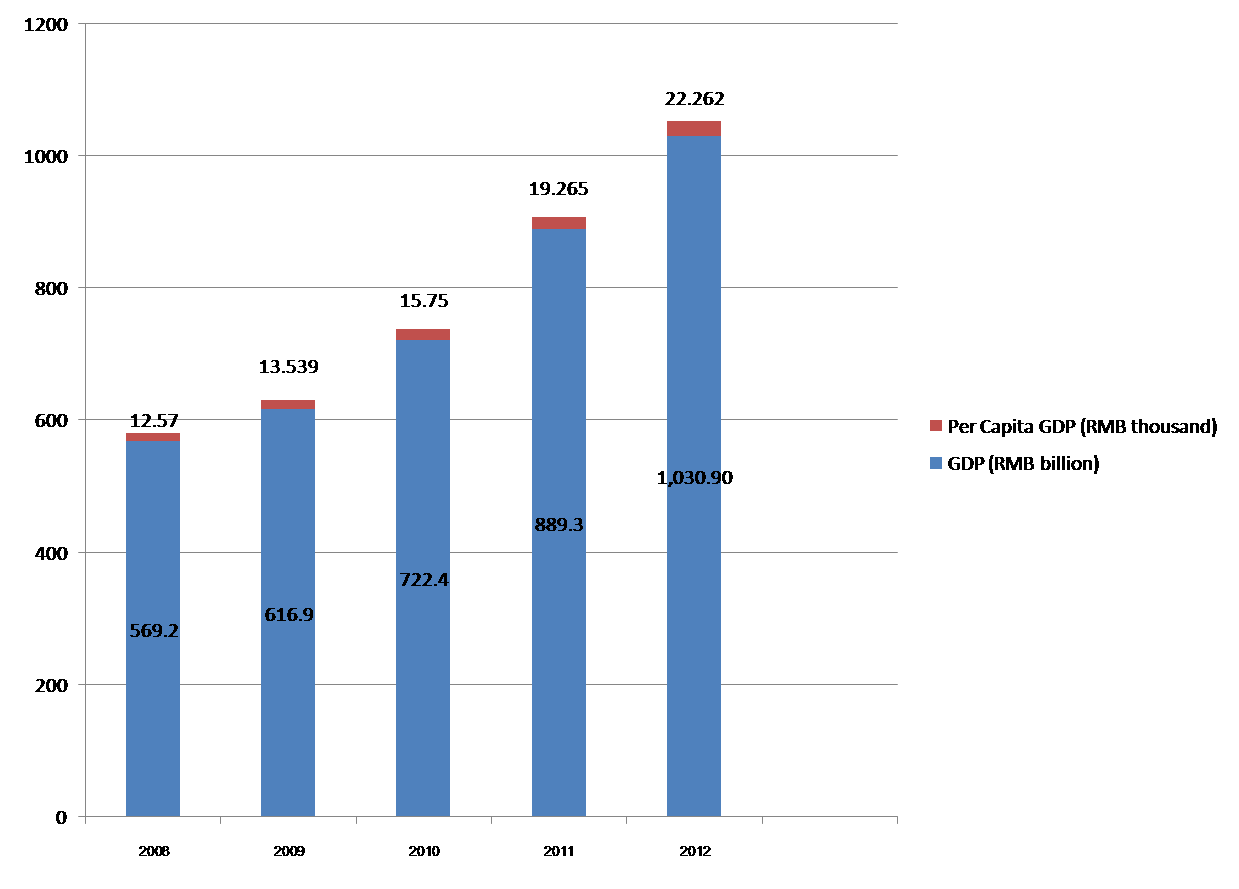 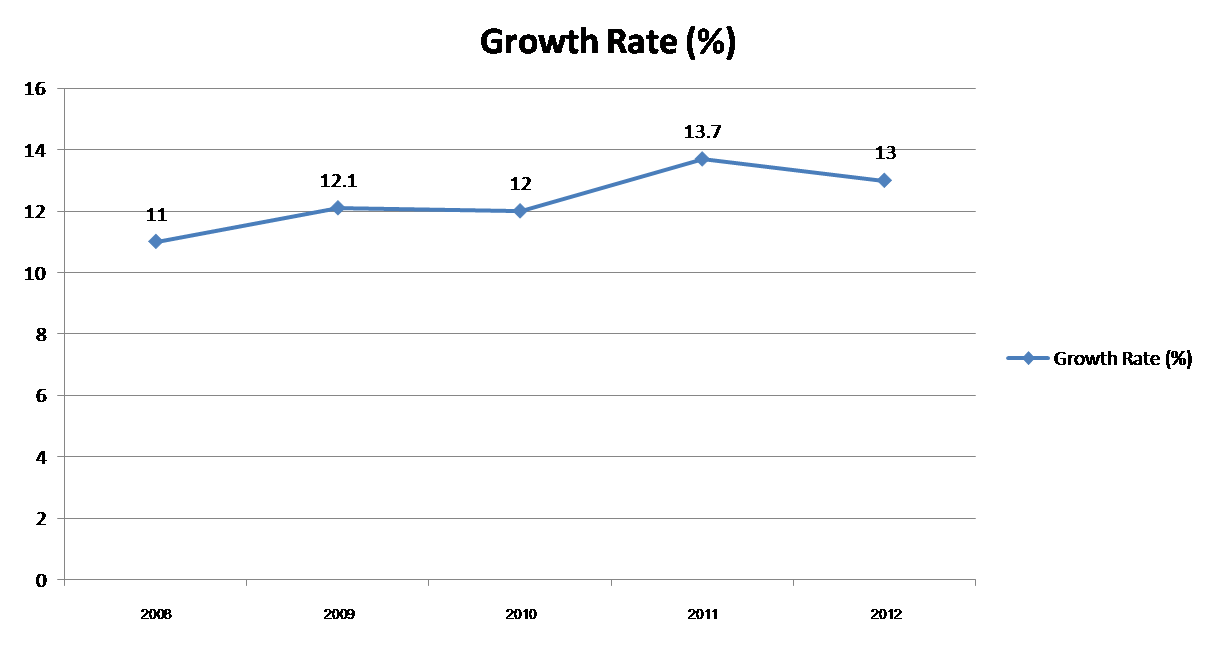 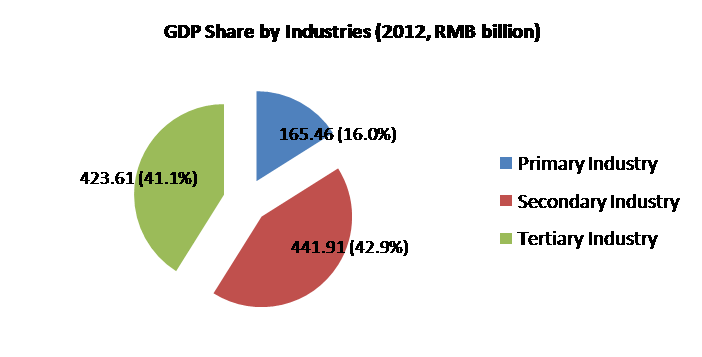 Yunnan, like the rest of China, has gradually liberalized its economy and has reaped substantial benefits from opening up to the outside world. Through its policy of open border cities, international trade has flourished in Yunnan, especially with neighboring countries, of which ASEAN countries are the major trade market. International trade reached US$ 21 billion in 2012, with US$ 10.02 billion in exports from Yunnan and US$ 10.98 billion in imports. The international trade in 2012 was considered as a milestone to breakthrough US$ 20 billion for the first time in Yunnan’s history and became the 5th of fastest growing provinces in China. 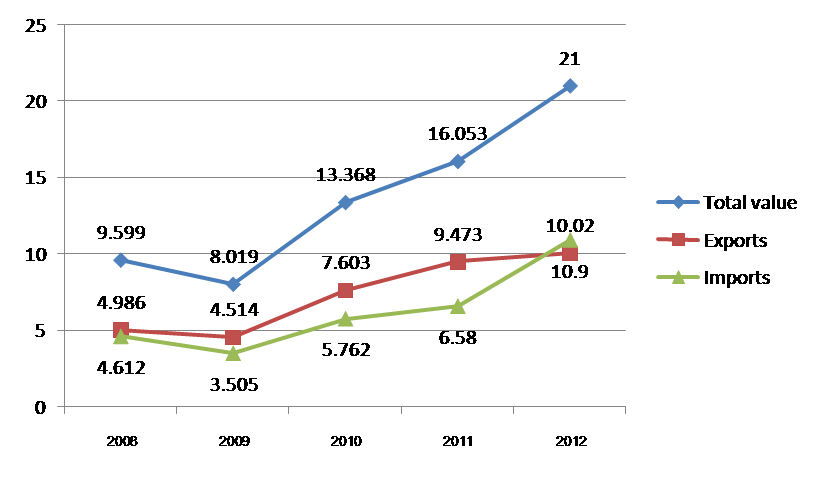 Total value of Exports and Imports: General trade and frontier petty trade in 2011 (by mode of trade). 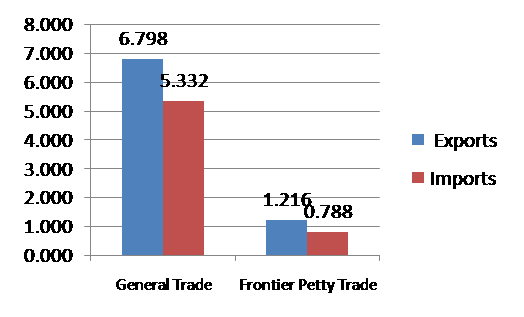 As reported by the Department of Commerce of Yunnan Province, from January to June 2013, total amount of Export and Import is US$ 8.41 billion, of which exported US$ 4.09 billion at a rate of 26.5% and imported US$ 4.320 billion at the growth rate of 5.3%. It is lower than the first quarter.  The foreign trade growth rate is getting slower than first quarter, but still higher than National level with a steady upward trend. (Source: http://www.yunnan.cn)

Yunnan has expanded its trade market to 179 countries and regions around the world, of which ASEAN is the biggest market with trade value of US$ 6.76 billion in 2012, 31.7% of total trade value of Yunnan. Most imported goods originate from Myanmar (its largest trade partner), Peru, Australia, ASEAN 6 and the United States. Yunnan trades actively with its border neighbors, the Lao PDR and Vietnam, but Myanmar is the main border trade partner. (Source: Yunnan Statistical Year Book 2012)

Precious metal became the top item exported from Yunnan with a value of US$ 3.24 billion, 32.3% of total exports value, 7 times than last year. The traditional agricultural products ranked as the second items with US$ 2.24 billion (20.4%), followed the mechanical and electrical products with US$ 1.67 billion (16.6%).  Major import items, including metallic mineral ore, natural rubber, timber, refined tin and its products, palm oil etc resource products and agricultural products, are growing fast to share the imports value. 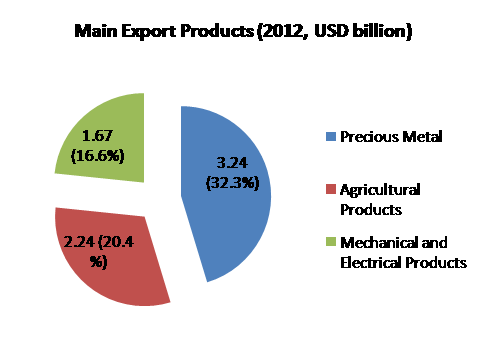 The foreign investment to Yunnan province covered in many industries without clusters. Real Estate is the main industry for attracting foreign investment with USD 657.66 million, 30.4% of total amount of FDI, followed by Wholesale and Retail Trade and Food Services (13.87%), manufacturing (12.41%), Construction (8.9%) and Production and Supply of Electricity, Gas and Water (6.59%) and others sectors (28.19%). Freight Volume and Increase Rate by Transport Modes of Yunnan, 2012

The total number of overseas tourist arrivals in 2012 accounted for 8.864 million , including one-day-tour in borders, with around USD 1.95 billion foreign currency contributed to the provincial income. Meanwhile, around 196 million domestic tourists visited the province with a net earnings of  RMB 157.94 billion (around USD 25.68 billion) in 2012. The total tourism revenues of Yunnan was RMB 170.25 billion (around USD 27.68 billion). 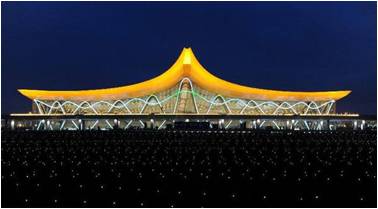 Railway network   is about 2,500 km. During 12th Five-Year Plan period, around  5,000 km has been planned.. It is predicted that the “eight trans-provincial railways and four trans-national railways” network will be completed during the plan period. The total length of highways in 2011 in Yunnan was 214,500 km, including 2,746 km of expressways, ranking as the first in western China with13,141 km of High Class Highway above Class II has been opened to traffic.The Yunnan sections of four international passages (China-Vietnam, China-Laos-Thailand, China-Myanmar and China-India) are  of High Class category. 5 main rivers including Jinsha River, Lancang River, Red River, Nanpan River and Nujiang River and 63 branches of them, covering 14,200 km, run through Yunnan, among which there are over 8,000 km of exploitable and usable navigation channels. During 12th Five-Year Plan period, shipping mileage open to traffic will reach 4,000 km. , In power infrastructure,  a power grid with 500 kV as the trunk and 220 kV as the main grid, covering 16 prefectures/cities has been established in Yunnan and power is available in all administrative villages. Through the construction of “broadband Yunnan”, over 100,000 km communication cable network and China-Myanmar, China-Laos international cables have been established. 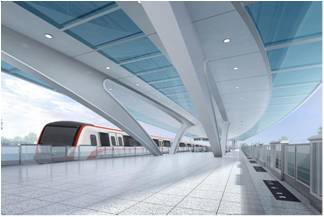 High speed broadband network is available throughout the province.9 lines, totally 304-km-long, are planned to be built in Kunming. Subway Line 1 and 2 put into service in 2012; Line 3 will be put into trial operation in December 2013.

Yunnan has 16 Class I national ports, 7 Class II ports and is one of the major port provinces in China. 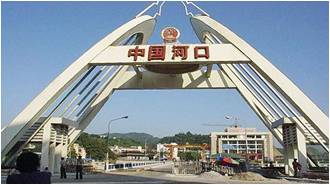 Research and Development in Yunnan Province Renowned as the Kingdom of Non-ferrous Metals, Yunnan has a complete collection and large reserves of various minerals. Of the 168 kinds of minerals discovered in China, 142 ones can be found in Yunnan. The reserves of 54 of these minerals in the Province rank among the top 10 in the country. Moreover, Yunnan comes out in the top three places in China in terms of the reserves of 25 minerals including lead, zinc, tin, phosphorous, copper, and silver. Yunnan is also rich in non-metallic minerals such as limestone, dolomite, halite, marble, and granite.

Energy resource development in Yunnan Province has huge potentials, in particular in the area of hydropower development. Over 600 rivers in 6 water systems across the province hold 222.2 billion cubic meters of water resources in store. The theoretical hydropower reserve is estimated at 103.64 million kilowatts, the exploitable installed capacity amount to more than 90 million kilowatts and the annual generating capacity is up to 394.45 billion kwh.

Yunnan province also enjoys bright prospects for developing its geothermal, solar, wind and other energy resources. For example, with its coal reserve ranking the ninth in the country, Yunnan is an important coal industry base in southern China． Yunnan has particularly rich geothermal resources with 706 hot springs of different types distributed in 124 counties. About 360 million cubic meters of hot water flow out from these hot springs every year and the thermal power discharged is equivalent to that of burning 118.7 tons of coal. It is next only to Tibet in geothermal resources and thus constitutes an advantage for Yunnan to capitalize on for the development of its tourism as well as thermal energy industries.

Yunnan boasts the largest variety of plant species in China. Of nearly 30,000 species of higher plants in China, 17,000 or 62.9% of the total, can be found in the province, thus giving Yunnan the reputation of being a Kingdom of Plants. 105 varieties of forests are flourishing here, including tropical rainforests, monsoon forests, and virgin forests. More than 4,000 species of trees are found in Yunnan, of which more than 2,700 are arbor species. A full range of tropical, subtropical, temperate, and frigid plants are growing here. Many of them are antique and rare species or species unique to the province. Yunnan is also endowed with particularly rich bamboo resources. There are a total of 200 species of bamboo plants in the province and the total acreage amounts to more than 100,000 ha.

Besides these, Yunnan has more than 300 varieties of cash crops, including tea, rubber, oil palm, anise, tung tree, cinnamon, and coffee, many of which are unique to the province. Yunnan is also a treasure house of Chinese medicinal herbs. More than 2,000 species of medicinal herbs grow throughout the province, of which 1,250 are herbs in common use. More than 400 are used as raw materials for traditional Chinese medicine prescriptions and pharmaceutical manufacturing. Because of its varied species of spices, Yunnan is also renowned as the homeland of spices. In total, there are around 400 species of spices belonging to 69 families.

Yunnan Province has a total of143 industry parks located in 16 prefectures, of which there are 6 national level industry parks (include 3 national border economic zone), 40 provincial key and featured parks.

Planned to cover an area of 9 sq. km, of which 5 sq. km for Phase I development. Well-developed water supply, electrical power supply, gas supply, and communication facilities as well as supporting facilities such as banks, bonded warehouse, schools, commercial and residential quarters, and apartments. 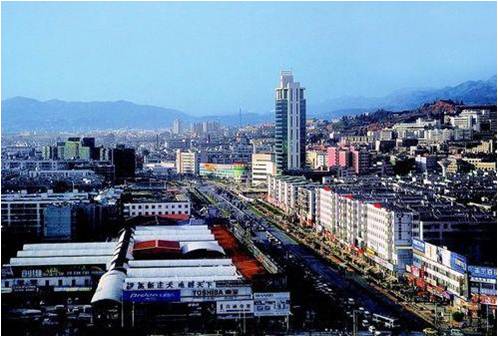 Roads, water supply, drainage, communications, and power supply facilities in the Zone has been completed; banks, post office, telecommunications service outlets, hospital, and schools has been set up.

For details of Industry Park of Yunnan Province, please visit the Yunnan Industry Park Investment Network (in Chinese) at http://www.ynyq.org.cn/index.php.

1) Services Outlets are not include headquarters