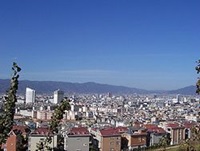 Yuxi is a prefecture-level city in the Yunnan province of the People's Republic of China. Located in central Yunnan and only 85 kilometers away from provincial capital Kumming, Yuxi is an important destination which is leading to ASEAN countries. The area is 15,285 km2 and the population is approximately 2.5 million. Yuxi municipality composes of one district and eight counties, rich in both natural and human resources, especially water.Hence, the name Yuxi which means stream like sparkling pearls and jewels. Yuxi is regarded as one of the leading cities in western China as its comprehensive power is concerned. It is also one of the best cities for investment in southwest China for its excellent infrastructure
Administrative Divisions

For the development of Yuxi, Yuxi City Investment conference held recently gratifying achievements, signed a total of 30 projects with a total investment amounted to RMB 19.62 billion, with the focus on industrial development planning to meet ecological construction and environmental protection to achieve scientific development, and leapfrog development.

Yuxi municipal government clearly stated next five years objective is to accumulate the actual use of RMB 130 billion of domestic funds outside the city, actual use of foreign investment US$ 300 million, and strive to foreign investors to invest in sustainable form tax revenue, stimulating employment industry.

Yuxi is regarded as one of the leading cities in western China as its comprehensive power is concerned. It is also one of the best cities for investment in southwest China for its excellent infrastructure.

The city will insist on the basic strategy of “ecology for the city image, tobacco for its prosperity, industry for its strength, and agriculture for its stability” to promote harmonious and sustainable economic and social development, focusing on the full development of tobacco, mining, metallurgy, tourism and county-specific economy

Endowed with pleasant climate, Yuxi is rich in crops and tobacco leaves due to the fact that there are over 2300 hours of sunlight a year in the region, adequate rainfall in the summer and excellent soil. With 80% of Yuxi’s revenue from tobacco taxes, this is the town that tobacco built. 1 trillion cigarettes are produced in China every year, as the heart and lungs of China’s huge tobacco industry; Yuxi is significant contributor to China total tobacco production. The government collects US$1,000,000,000 per day in taxes from china’s hundred million smokers

Yuxi is the home of the Hongta Group, which owns a lot of famous cigarette brands such as Hongmei, Hongtashan and Ashima. Yuxi has a Hongta avenue, Hongta hotel, Hongta sports stadium and tobacco museum devoted to praise the pleasures of smoking. Hongta factory in Yuxi is one of the world’s largest factories with annual production of 93 billion cigarettes. In 2012, there are 3.803 million boxes of cigarettes were produced, 209,000 more than previous year, account for a growth of 5.8%. .

Domestic sales over two trillion cigarettes in 2006, up 3.9% year on year means a very strong domestic base for dometic brands, meanwhile foreign brands have barely 5% market share in China. However Hongta is now spending on technology and branding to compete globally. China’s huge domestic market is increasingly a dress rehearsal for the international ambition of Hongta.

Profit margins are rising at Yunnan’s cigarette makers which pre tax profits recorded of RMB 36.403 billion; annually increase 21.24% according to the Yunan Ministry of Commerce. Sales of the provinces cigarettes over the period were up 9% to 5.647 million cases. On the other hand, the World Health Organization’s Framework Convention on Tobacco Control (FCTC), which commits China to raise cigarette taxes and price.

Comparison of Yield, Cost and Income in Tobacco at 3 Yuxi sites 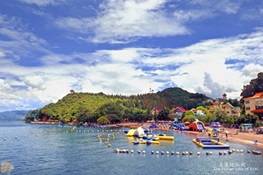 Tourism is the most important pillar of the service sector. During 2011, 13.09 million tourists visited the city, with an annual growth rate of 12.4%, while tourism income is RMB 5.71 billion in totals, which represent a rise of 40.9% compared to the previous year.

Yuxi continues to give a special attention to the development of tourism with the combination of ecology and culture.  As on statistics in 2012, there were 14,617,000 arrivals to Yuxi, increase 11.7%. Tourism revenue reached RMB 7.06 billion as an increment of 23.6%. There are 42 star-level hotels, 25 domestic tourism agencies, 2 international tourism agencies, 19 level A scenic spot. 1 national industrial tourism demonstration sites, 3 Yunnan first tourist towns.

A total of domestic tourists come to Yuxi is 833.55 million passengers, an increase over the previous year by 16.6%. In another hand, there are 50,509 international passengers visited in 2012, which account for an increment of 91.5%. Yuxi is on its way to be a favorite destination for tourism. Annual total tourism income of RMB 77.04 billion, an increase over the previous year by 29.5%, of which domestic tourism revenue RMB 75.85 billion, increase 29.5% , overseas tourism revenue RMB 1,844.56 million, account for an increase of 35.2% .

Yuxi is extremely convenient for traffic with 2 State Road, 9 Provincial highway, 1 railway, highway 5 connects eight County District and bordering on the four city. By the end of 2012 the total highway mileage reached 16579 kilometers. Yuxi also has first privately built Kunyu Railway which is connected with the national railway network.

There are several ethnic minorities group in Yuxi such as Yi, Hani, Dai, Hui, Mongolian, Bai, Miao and Lahu, who together make up one third of the population.

The population of the minorities (in 2002) 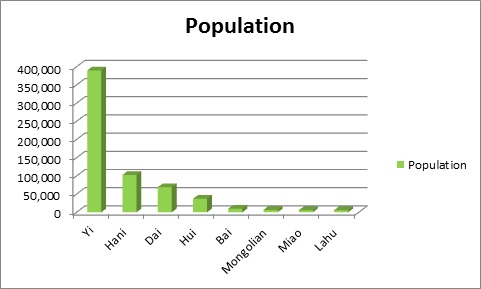 Research and Development in Yuxi 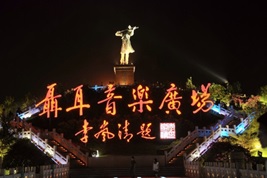 Yuxi has a mild climate which is good for high-level agriculture and high quality tobacco. In addition, 40 kinds of already known mineral resources have been estimated to possess a potential economic value of more than RMB 400 billion, among which steel, among which steel, copper, phosphorus and nickel are estimated to have value of RMB 165 billion. The reserve of steel, copper, nickel and cobalt has been proven to be the first in Yunnan Province. Reserves of these minerals amount respectively to 716 million tons, 2.9 million tons, 512,000 tons, 233,000 tons, 572 million tons, accounting for 32.9%, 42.4%, 74%, 58% and 19.5% of province’s total. The nickel mine is the second biggest in the whole country. Phosphorus reserve ranks third in Yunan Province.

The area also has beautiful natural sceneries and colorful cultures. Fuxian lake in Yuxi with an area of 213 square meters is the third largest lake in Yunan province. Various festivals, dances music and folk cultures of different ethnic minorities groups are also one of the factors which make Yuxi become a favorite destination for tourism.

Agricultural production has a stable development in the year of 2012, the farming, forestry, animal husbandry, fishery and related services added value of RMB 9.74 billion, increased 7% if compare with the previous year. 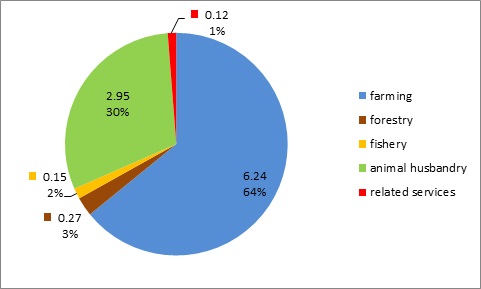 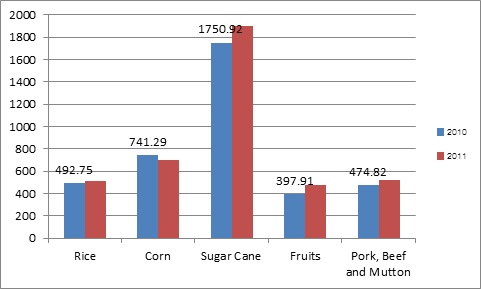 Tobacco related products, minerals and electricity are the main industries of the city. In 2011, the tobacco industry realized value-added industrial output of RMB 43.35 billion, contributing 38.9% to the sector’s total.

Cigarette and related industries are the main contributors to the industrial sector value add with the growth rate of 10.1%. After that is mining and power industry with 15.7% growth rate. 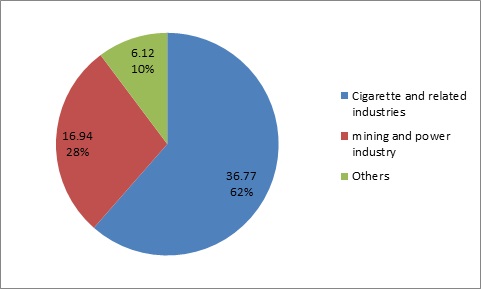 Since the reform and opening up to the outside world, Yuxi has become a vigorous city of strong and steady development supported by a series of pillar industries, especially the Hongta Group, the largest cigarette maker in Asia. According to the statistics of 2011, the current value of GDP reached RMB 87.66 billion (GDP per capita reaches RMB 37,913), representing a rise of 12.1% year on year. The city’s GDP account for approximately 10% of Yunan’s total. The local fiscal revenue added up to RMB 5.56 billion (the total local revenue reaching RMB 23.64 billion). The per capita urban bank deposit reached RMB 14155. 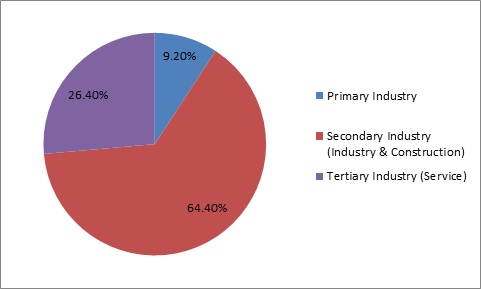 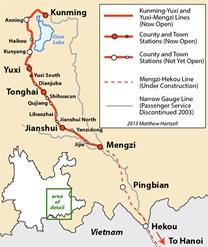 Referring to transportation, Yuxi city is related with China National Highway 213, which offers great convenience for its development in every aspect. The main transportation method is by bus when there is no airport in Yuxi. There are 2 bus stations, Central Bus station and Chengxi Bus Station. Ticket prices to Kumming range from RMB 18.5 to RMB40.In addition, there is one rail route which will take 3 hours from Kunming to Yuxi.